Young had time of his life at British Seniors… what Els-e did you expect? 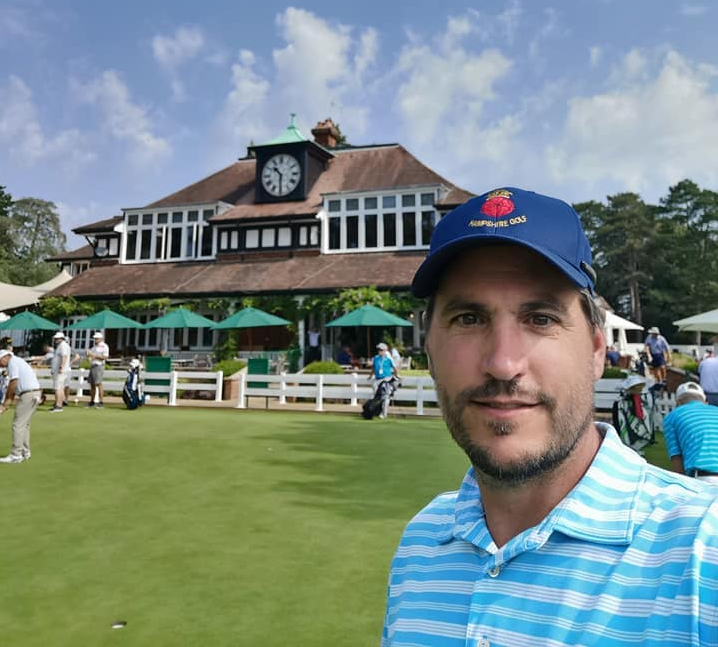 MARTIN Young made a brave fist of trying to make the cut after qualifying for the British Seniors Open at Sunningdale.But nothing could spoil the Brokenhurst Manor member’s weekend even after missing out eventually by three shots. The 51-year-old, from Ringwood, was basking in the glorious sunshine by the famous 18th hole of Sunningdale’s Old Course.

And not even the shade of the striking Oak tree framing the hole against the equally famous clubhouse could eclipse the former county captain’s pride after testing himself against some of the legends of the European Tour, who are now over 50.

Young, who won the English Mid-Am title as the leading over 35s title back in 2006, at the age of 36, said: “I have had a fantastic experience this week.

“I have wanted to test myself at this level – I came close at the European Seniors Tour Qualifying School at the start of last year, just missing out by a couple of places.

“But ever since I knew the British Seniors was coming to Sunningdale, I have had this event in my mind.

“I struck the ball well all week – the putter was just not my friend on Thursday and Friday. If I had putted anything like I am capable of, I think I could definitely have made the cut.

“Unfortunately, the wind got up on the back nine in the second round, and I found a few fairway bunkers. You can’t afford to do that on this course.

“Getting to be on the putting green alongside some of the greats of the game is a memory I will always have. I got to meet one of my heroes Ernie Els on the 18th during practice. He was just class. 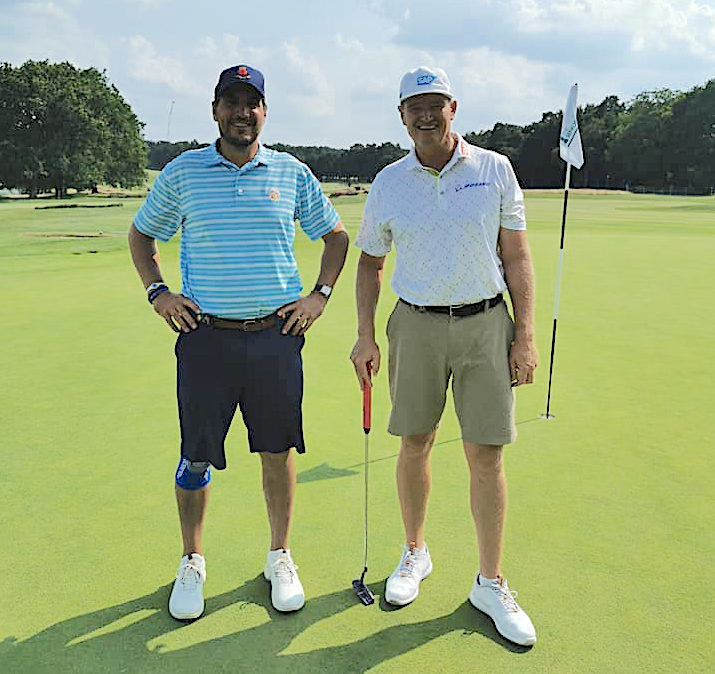 “But I have not finished yet. I will go to Qualifying School again – if the Legends Tour hold another one over the winter. There is also talk that England Golf will reduce the seniors age limit from 55 to 50, which would give me more targets to play in as an amateur – if I don’t manage to get a Legends Tour card, which would mean I would then turn pro.

“The youngsters have been pushing me in the county set-up – I am still in the first-team,” joked Young, who four years ago led Hampshire to their first English County Championship since Justin Rose was in the team back in 1996.

Young has won Sunningdale’s famous Gerald Micklem Trophy for the Over 35s three times in the last 10 years. That gave him every incentive to qualify for the only Seniors Major played on UK soil, which has been won by the likes of Tom Watson and Bernhard Langer.

But some of the lesser lights on the PGA Champions Tour have also been surprise winners of the Claret Jug in the 21st Century.

While Young has plenty of pedigree as an amateur – he is the only player to complete the Hampshire Slam winning all four men’s titles in 2014 – his realistic target was just to make the cut.

After an opening five-over par 75, Young thought he would have to shoot at least a 68 or 67 to make the top 70, who would play all four rounds.

He got off to a great start with birdies at the par-five first and the third. A dropped shot at the second after official scoring was later corrected, and also at the fifth, did not derail the three-time Hampshire, Isle of Wight and Channel Islands Amateur Championship.

A great up-and-down at the par-three eighth was followed by birdie at the driveable ninth, as he got to the turn in one-under par.

An exquisite chip saved his four at the tough 10th, but a solid drive at the short 11th rolled into a fairway trap, costing a bogey five – and a similar fate awaited on the much tougher uphill dog-leg 12th. 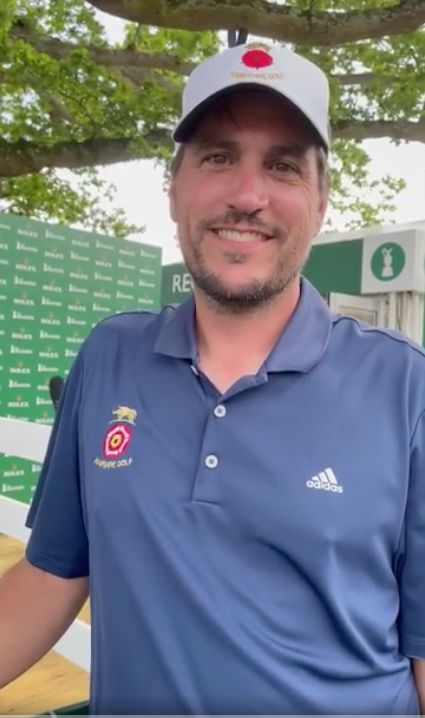 The cut had moved from two-over to three over still giving Young encouragement to Young, who was four-over with six to play.

The wind was at their backs as they turned for home, but his approach to the last hit a spectator and ended up in the sand, forcing Young to finish with a five and a round of 73, in a tie for 101st place.

A round of 70 would have seen him make the cut in his first professional event.

Hampshire captain Neil Dawson, who caddied for Young all week was full of praise for the veteran, who has now played for the county in four different decades in the South East League.

Dawson said: “That’s the best I have seen Martin hit the ball in the years I have known him. On the range next to the Legends of the game, he did not look out of place for one second.

“His ball-striking was simply awesome and I was so proud to stand alongside him and watch.”

Lancashire’s Trevor Foster was the only amateur to make the cut and claimed the Silver Medal – the 2018 British Seniors Amateur Champion played a practice round with Young, who came through the qualifier at Hindhead, finishing third after an excellent 69, including five birdies, and an eagle two at the short 13th, last Monday. 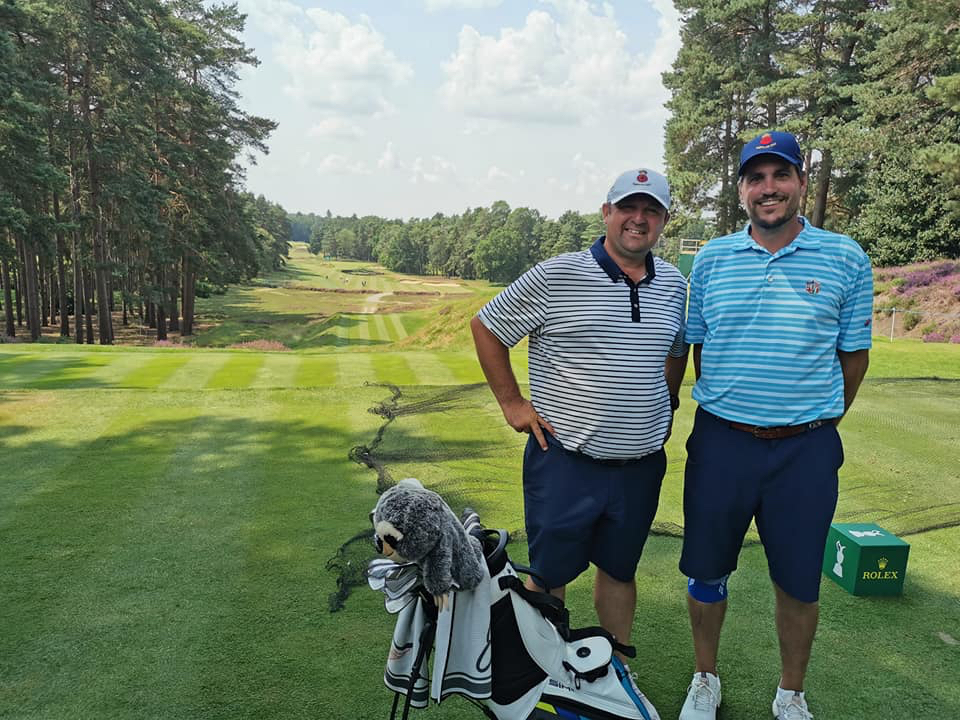