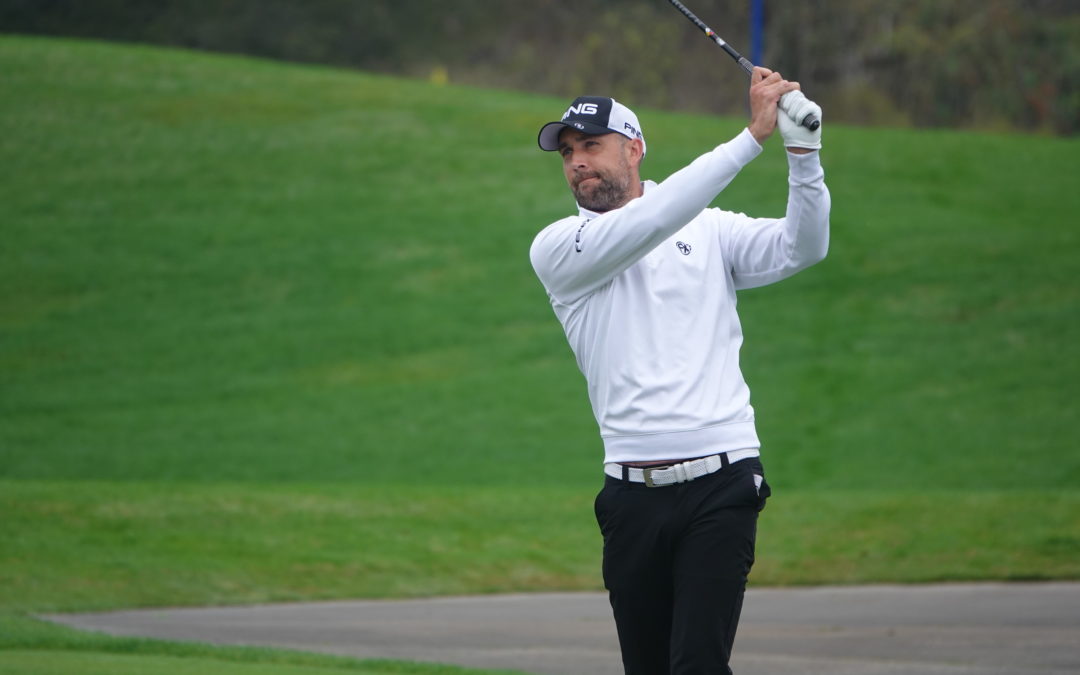 After posting a six-under 66 on Thursday, Lewton kept his foot on the pedal during Friday’s second round.

After making the turn at two-under for the day, the Woburn man caught fire over his final nine holes.

Lewton tallied birdies at Nos. 10 and 11 to reach 10-under for the week. After three consecutive pars, the 36-year-old rallied down the stretch with birdies on his final four holes of the day to reach 14-under for the tournament.

“I played pretty solid on the front but didn’t really hole anything,” Lewton said. “On the back nine, my putter just got hot and I hit a couple of shots close which helps.

“I birdied three of the par-threes which I think are generally the toughest holes around this place.

“I finished strong and I’ve been playing pretty well, so hopefully I can carry that on to the next couple of days.”

Players battled rainy conditions on Friday as play was delayed for an hour and 45 minutes.

Despite the difficult weather, Lewton was able to hit 17 greens in regulation during his second round and has only missed three fairways over his first 36 holes.

Lewton, who is playing in his first Korn Ferry Tour Qualifying Tournament, has experience playing around the world but returned to the United States to make a run at the Korn Ferry Tour.

Prior to his professional career, Lewton played his collegiate golf at North Carolina State University from 2003-7, and played on the European Tour in 2011 after earning his card at the Qualifying School.

Thirty-six-year-old Lewton earned his Asian Tour card at its Q-School at the end of that season and spent five years playing in the Far East.

The former England Boys and Men’s international – who was raised in the Milton Keynes area – missed out on place on the 2007 Great Britain and Ireland Walker Cup, alongside Rory McIlroy, at Royal County Down, having been named in The R&A’s original squad that year.

He had been runner-up behind McIlroy at the 2006 European Amateur Championship, missing out on a place at the 2007 Open at Carnoustie.

“I’ve always wanted to play golf in America, I’ve just never come across this Q-School before,” said Lewton, who has played on the Asian and European Challenge Tours since turning pro in 2008.

“I’ve been playing solid this year so that’s why I decided to come have a go.

“That was probably my main reason behind it because I enjoy playing golf over here,” said Lewton, who was a member of the same England Boys squad as Nick Dougherty and Zane Scotland.

TIED in second place behind Lewton is Taylor Dickson, who carded a bogey-free 65 on Orange County National’s Crooked Cat course.

Starting on the back nine, the Winthrop University product recorded one birdie on his first nine holes.

After making the turn, the 27-year-old found his rhythm with six birdies over his final nine holes to reach 13-under for the tournament.

Dickson, who has yet to make a bogey this week, had great motivation from his group during the second round.

Both his playing partners, Santiago Gomez and Tom Whitney, carded bogey-free second rounds of their own, as they combined to shoot 23-under.

“None of us in our group made any bogeys today, that was awesome. I’ve never been a part of that,” Dickson said.

“I hit my driver really well, I don’t think I missed a fairway and got up and down whenever I got out of position.”

Joining Dickson at 13-under is Curtis Thompson who carded a second round nine-under 62 on the Panther Lake course.

The Louisiana State University graduate tallied six birdies and two eagles including an eagle on the par-five 18th, his final hole of the day.

“Well, two eagles helps. I was making putts and obviously missed a few early that were makeable but made up for it,” said Thompson, who also celebrated his 27th birthday on Friday.

“There weren’t very many mistakes.”

Nick Hardy sits alone in fourth place at 12-under after posting a second round nine-under 63 on the Crooked Cat course.

•For live scoring in the third round click here.