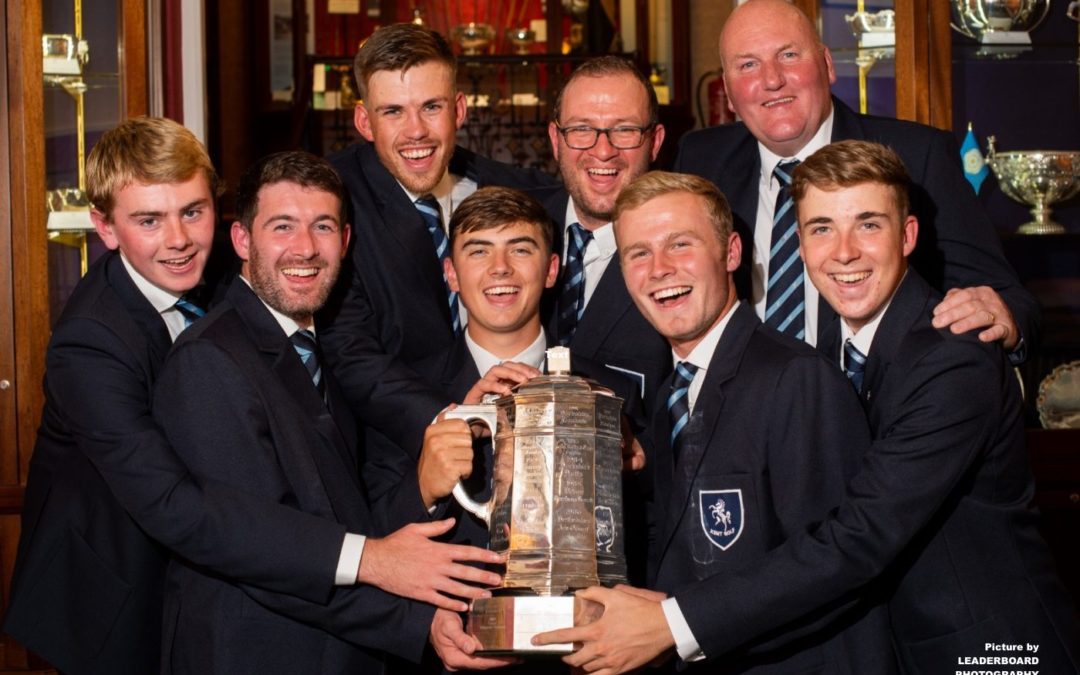 BEN Quinney was mobbed by jubilant team-mates after holing the putt which earned Kent a dramatic English County Finals victory for just the second time in their history.

The Kent PGA champion, from Bearsted GC, later admitted he didn’t know his team’s destiny lay solely in his hands after the final fixtures were started with a shotgun start in a race against the weather.

After being swamped by team-mates Quinney emerged from the scrum and said with a wide smile: “I knew it was important, but I didn’t know it was to win the championship.

“Even so, that’s the most pressure I’ve ever been under because you just want to win a point for the team and Danny.

“I was confident over the putt. I’ve had it before and knew how it would break. “It’s been such a long time since the county has won this that I think we’ll enjoy the party.”

Not since 1978 had Kent laid claim to the honour of being English County Champions – but that all changed in an amazing finale to two days of outstanding golf at Huddersfield GC.

Despite heavy downpours over two days, rain delays and a revised format for the English County Championship, nothing could put a dampener on an amazing outcome for Quinney, captain Danny Curtis and his team as they won the prestigious title for the first time in 41 years.

Kent topped the leaderboard with five points from their three games after a halved match in the morning singles against Somerset before the last-gasp 4-3 win over Northumberland in the afternoon.

But the bald facts and figures couldn’t fully convey the nerve-jangling chain of events that led Kent to their moment of glory.

With Northumberland – morning winners over Nottinghamshire – only needing to halve the afternoon match with Kent to earn their first title since 1965 – the odds were in their favour.

Kent knew a win would see them emerge victorious for the first time since European Seniors Tour major winner Roger Chapman, Paul Hoad, Toby Shannon – who beat Sandy Lyle to win the 1974 British Boys Championship at Hoylake, and Roger Sloman were in the team that claimed the trophy at Frilford Heath.

Anchorman Sherreard was on fire with five birdies in a row to win his against Andrew Minnikin 5&4.

But Northumberland’s Alex Dixon, Matty Lamb and Gary Donnison hit back with three points against Jacob Kelso, Mason Essam and Jensen Hull respectively, to leave the outcome hanging on Quinney in match three.

With two holes to play, Quinney was one-up against Sean Heads.

But a three-putt on the first hole – his 17th after the shotgun start – opened the door for Heads.

A large crowd gathered round the second green to witness the finale.

Heads came agonisingly close with a 25-footer to guarantee a halved match and overall victory for Northumberland.

Quinney then kept his cool to read the left-to-right break on the slippery, 10-foot birdie putt and find the middle of the cup.

Kent captain Curtis was struggling to put it into words, but said: “You couldn’t write it. The last putt of the last match, but these boys deserve it.

“Benn Barham has been brilliant as coach and our team of volunteers have played their part.

“We’ve waited a long time to get back to his position and I’m thrilled for everyone associated with our county.”

The finale was teed up after a morning of rain-delayed action saw Kent slip up and Northumberland move into pole position.

Northumberland claimed a 5-2 victory over Nottinghamshire.

A soggy start to the day was an inconvenience for players, officials and spectators alike.

A two-and-a-half hour rain delay from 8.30am forced everyone indoors until the weather picked up and the heroic greenstaff got to work on draining the putting surfaces.

On resumption of play shortly after 11am Kent ran into a Somerset side intent on improving from their narrow first day loss against Northumberland and the match finished tied on 31/2-31/2 points apiece.

Burns, Jensen Hull and Sherreard – the former England international, who qualified to play in the 2008 Open – all notched convincing wins for Kent while Walker Cup player Tom Plumb, Taylor Stote and Sam Fernley did likewise for Somerset.

Nerves were jangling as England junior international Kelso and Will Poole came down their last hole – but neither man could eke out a birdie to sneak the win and honours were even.

That allowed Northumberland to head into the final round of games knowing a draw against Kent would be good enough to claim the trophy.

The manner of defeat was cruel on Northumberland and their captain David Gilroy – and especially Wharton, Dixon and Donnison who won all three of their games.

But all three counties were quick to offer congratulations to Kent Golf president Jim Pocknell, praising his team as worthy and sporting winners.