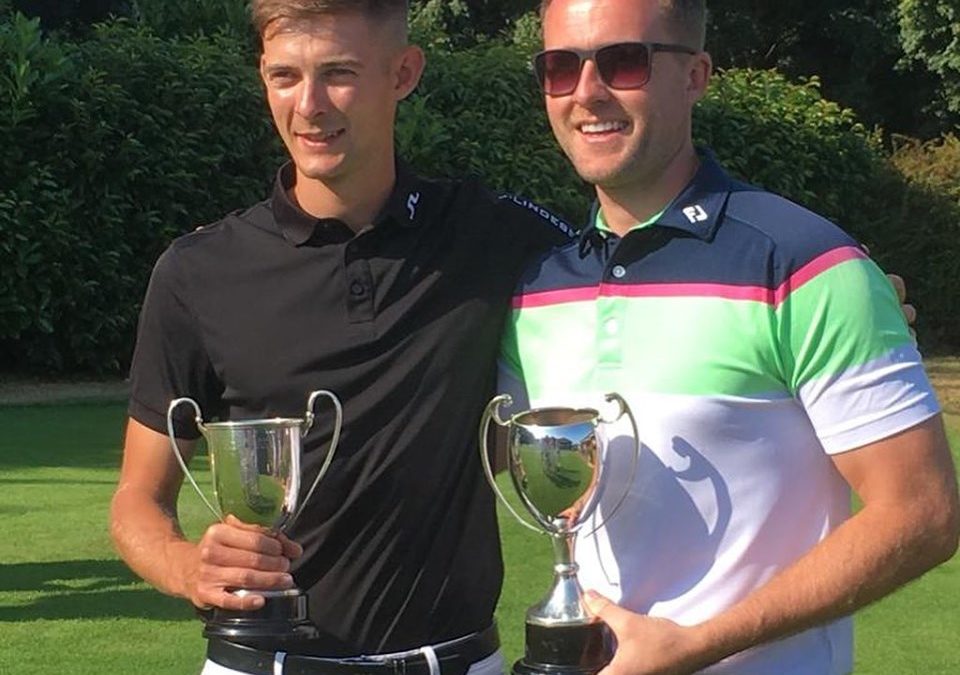 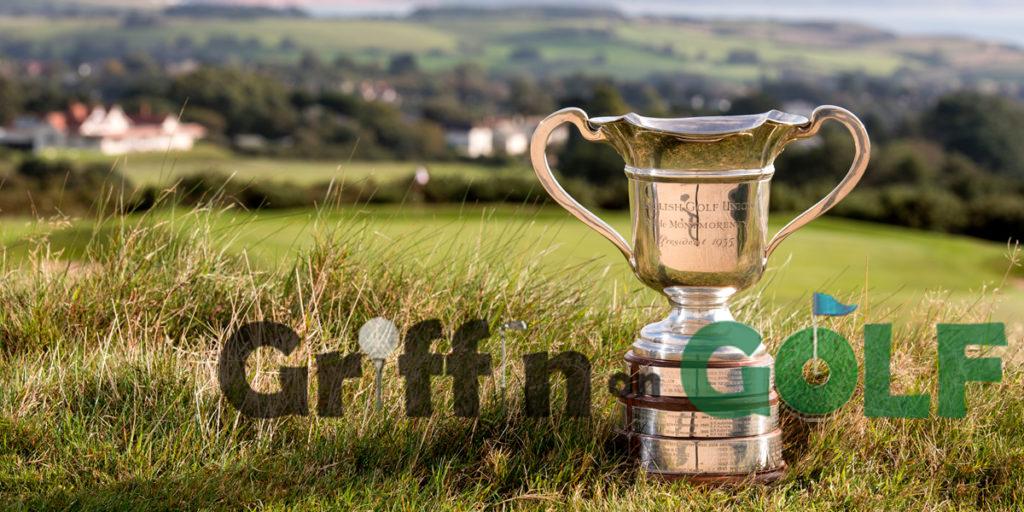 The winners of the English Champion Club tournament are presented with the De Montmorency Trophy. Picture by LEADERBOARD GOLF

SHANKLIN & Sandown’s first-team captain Conner Knight will be relying on some inside knowledge as he and team-mates Ben Nicholls and Ben Guy attempt to land the English Champion Club title on Sunday.

The trio arrived at Romford Golf Club, in Essex, where Nicholls’ close friend Richard Collins is the club champion.

And they spent Friday afternoon practising for the 36-hole championship against the country’s top clubs battling it out for the De Montmorency Trophy, one of the most recognisable cups in amateur golf in the UK.

Knight explained: “We spent the afternoon playing the course. Richard showed us all the right spots to miss on the difficult holes, and gave us lots of information about the greens and likely pin positions.

“So we were able to put a lot into our practice and got lots of good insights into the challenge facing us this weekend.”

And there was more good news for Shanklin members, who are hoping their “second string” team can follow in the footsteps of Hayling and Brokenhurst Manor as Hampshire teams that have claimed the De Montmorency Trophy.

Connor, who was appointed captain of Shanklin & Sandown’s Hampshire Sevens team, that has gone unbeaten for four games this season, reveals they have another weapon in their fight to become the first team from the Isle of Wight to win the England Champion Club title.

He said: “There are a lot of similarities between Shanklin and Romford, which were both designed by James Braid.

“We all noticed that the dog-leg holes are similar to our course in terms of the kind of lengths you have to carry your tee shots, or your approaches into the green.

“Braid courses are all classics, with the emphasis very much on the second shot. We all really felt at home in the practice round and all played very well.

‘With the help Richard has given us, we are as confident as we can be about our chances going into the competition.”

The trio have been forced to stand in for Shanklin’s two college stars Conor Richards and Jordan Sundborg plus Hampshire Colts manager Nat Riddet, who helped the Isle of Wight club win the county Team Championship for the fourth time in five years, during June’s county championship, at Army GC. 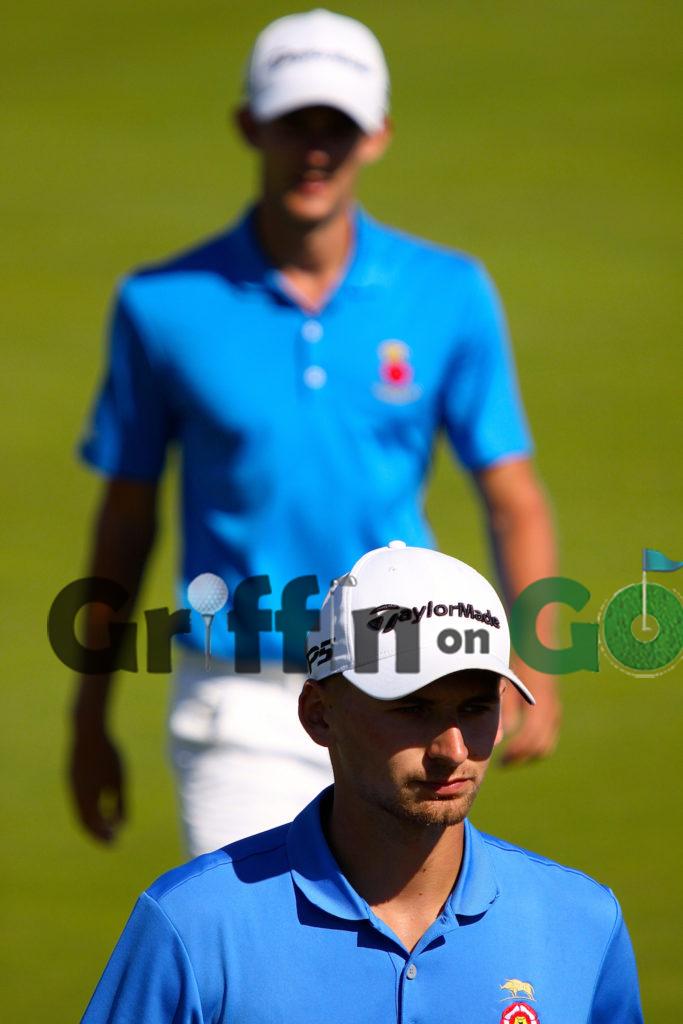 Shanklin & Sandown’s Conor Richards, who has returned to Miami, with Conner Knight on the bag in a Hampshire legue match. Picture by ANDREW GRIFFIN / AMG PICTURES

Conor has flown back to Miami for his second and final year playing for Miami’s Barry University in the NCAA Division One while Jordan, the reigning European Universities and Colleges Champion, headed over the border to complete his fourth year at Stirling University.

With Riddett also unavailable, Knight and Guy with the next two lowest handicaps in the club were automatic choices to play along with in-form Nicholls.

But representing Shanklin in the England Golf event has come at a price for Conner and Nicholls. The club’s County Sevens are in the last four at Petersfield Golf Club, on Sunday.

And Knight kept a big secret from his County Sevens side when they faced Weybrook Park in the fourth round, last month.

Victory against the Basingstoke club would put Shanklin & Sandown through to the last four of the Hampshire Inter-Club Knockout for the first time since 2006.

Before a ball was struck at the Lake course, the 26-year-old teacher knew that victory would mean he would miss out on playng in the semi-finals, with the winners meeting in the afternoon final.

Conner said: “Because Shanklin had also qualified for the English Champion Club, I already knew the two events had clashed. Ben Nicholls and I have won all four of our games this season in the Sevens.

“But our absence does mean that Dan Mew and Shaun Williams who played in two of the earlier rounds – and also have 100 per cent records – can play in the final.

“They both play off two and I know the Army and Royal Guernsey who are playing in the other semi-final have low-handicappers, so if we can get through our semi-final match with Lee-on-the–Solent, there won’t be many shots given, which will make it very much a scratch event..

“That will mean it will come down to who is the better side at matchplay on the day, and I am sure our captain George Foreman will help get the best out of the boys on the day.”

Foreman, who plays off two, will field two father and son pairings, which will probably be a first in Hampshire Sevens history. Kevin Simpkins, who is off 10, will be joined by son Harvey, a seven-handicapper, while five-handicapper Tony Williams is joined by son Shaun, who is off seven.

The other member of the team is Andy Warren, off five.

Conner, added: “We are out early on Sunday morning, so if we are unable to post a decent total that has a chance of winning, we will get away from Romford as soon as possible and get down the A3 to cheer on the team.

“Hopefully it will be in the final, but if it is in the third and fourth place play-off, we all want to be there to support the guys, who have played great all season.

“If we are lucky enough to win the De Montmorency wouldn’t it be great to get there later in the evening and hopefully find out Shanklin & Sandown have pulled off a remarkable double?

“We are playing some of the strongest clubs in the country at Romford. But there could be a few more that won their county qualifiers with players who are at college in the States and might have had to draft in other players in their place.

“We will be trying our best whoever we find ourselves up against,” added Conner, who won the Shanklin & Sandown Club Championship by beating Ben Nicholls in a four-hole play-off, in July,