Casey calls the shots on whether Wentworth is better in autumn 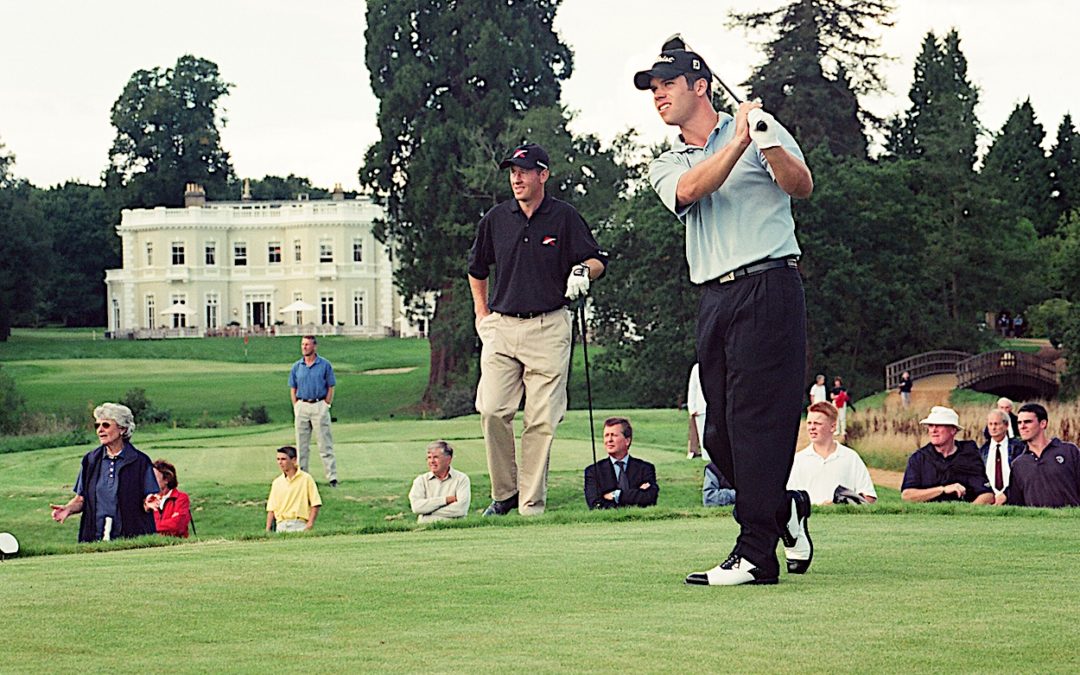 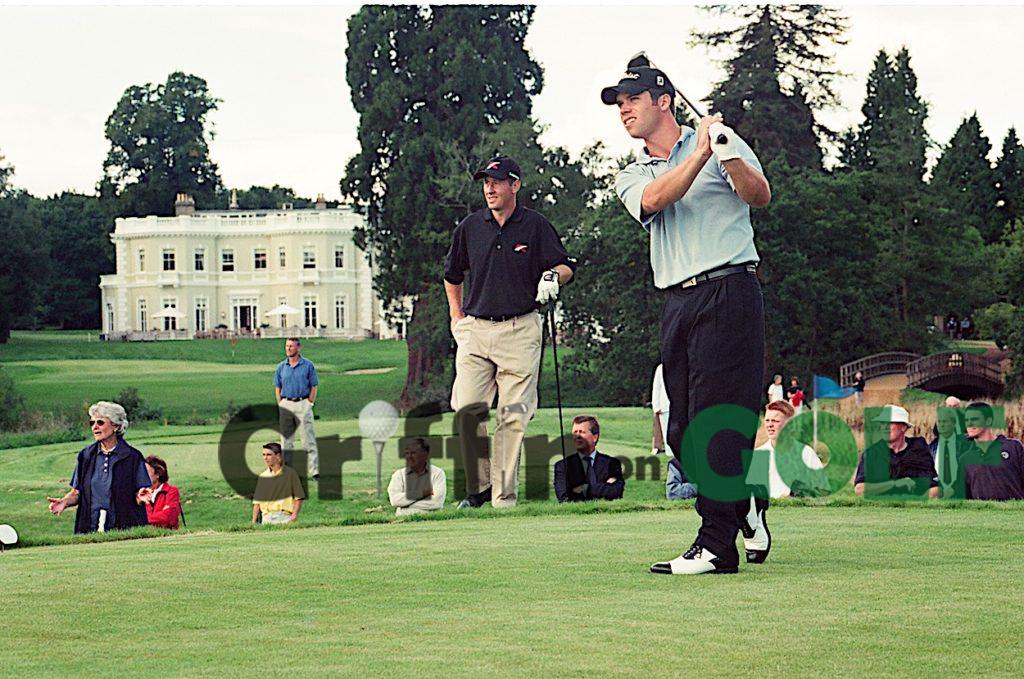 Paul Casey playing in an exhibition match at Burhill in 2001 – the Surrey man has always loved playing Harry Colt Courses like Wentworth and his own club at Weybridge. Picture by ANDREW GRIFFIN / AMG PICTURES

IT is 10 years since Paul Casey enjoyed getting his hands on the BMW PGA Championship trophy – at the course that first fuelled his dreams of becoming a professional golfer.

That narrow one-shot win on the West Course – which had already undergone three years of alterations under Ernie Els’ guidance, as the owners tried to preserve its place on the world stage – is still fresh in the memory bank for the US-based pro who started watching the PGA Championship in the late 1980s.

Casey arrived in Virginia Water this week fresh from his first win in Europe in four years after some superb ball-striking at the Porsche European Open, in Hamburg, two weeks ago.

And within minutes of driving down the Burma Road, the memories of those trips as a teenager among thousands of fans that travelled to Wentworth every May, came flooding back, for Casey, who was a junior at Weybridge’s Burhill GC.

“Great memories,” Casey said. “This was my first exposure to professional golf watching greats like Seve hit shots out of the trees and play this great golf course.

“It’s always had fond memories, I grew up only 20 minutes from here. That feeling of being victorious around a course I loved and had strong affections for, nothing felt better at the time.

“It does feel like, in a weird way, a lifetime ago. I remember the birdie-birdie finish to beat Ross Fisher by one, bless him.

“It was one of the biggest victories and still is in my career because this is where I used to come and watch golf.

“The greats like Seve and Faldo and Woosie and all those guys play around this golf course, which was the spark which really sort of lit the fire.

“I wanted to play professional golf and do what those guys were doing.

“To do so well on a course that I knew and loved was a dream come true. I still pinch myself. I have two titles here.”

Casey was referring to his win in the World Match Play, which came in 2006, beating Shaun Micheel 10&8 in the 36-hole final.

“Obviously the World Match Play was another one of those,” the 43-year-old said. ““I have two clubs on display in the great clubhouse behind us, which I’m very proud of.

“It’s nice to be able to add to the fabric of golf and get your name etched on trophies.

“I’d love another one. To have a decade between a couple of titles would be special and I guess there’s no reason why I can’t.”

So having won in the spring and autumn at the Wentworth Club, which date in the calendar does the former Surrey county first-team player, prefer?

“I prefer it, actually, later in the season,” said Casey, who is still the last player to win back-to-back English Amateur Championships some 19 years on.

“There’s been a lot of technology that’s been thrown at this golf course – so it’s probably going to be even better than I remember.

“But it was always, for me, a preferred playing surface around sort of September, October. The course has had a perfect sort of growing season.

“Usually firmer in the latter half of the year because we’ve kind of gone through a summer where things have cooked a bit, which makes the ball release a little bit more on the greens and we have to be a little more precise with shots.

“The poa doesn’t sprout quite as much, but these greens have changed. The surfaces are different now. Yeah, to me, a much superior test of golf later in the season.”

But another consequence of the date switch, made when the USPGA Championship was switched from August to May’s traditional BMW slot, is that a number of top Americans have made the trip over, now the FedEx season is complete.

They include Patrick Reed and Tony Finau – members of the Ryder Cup side beaten by a record margin at Le Paris National nearly a year ago – plus Billy Horschel.

Casey, the World No. 13, said: “Got an amazing field this week, but if I keep playing the golf I’m playing, I’ll give myself a chance.

“This is our flagship event. BMW are one of the greatest sponsors in golf, not just on the European Tour. This is a Rolex Series Event. This is always a big week.”

And the BMW PGA’s importance has been increased further by the commencement of the Ryder Cup qualification at this week’s event.

Casey added: “If I can make points early, it takes the pressure off that I’ll be feeling later, next year, to try and solidify a spot on that team.

“Crazy we are already thinking about it. I’ve not even got over celebrating last year’s victory.”

And of course, there is still the Race to Dubai’s climax to come in November, which Casey was quick to acknowledge.

The former Arizona State University record holder – who rose to World No. 3 his highest poisition in the OWGR – after his second win at Wentworth a decade ago, added: “I’m not playing a full schedule, on The European Tour.

“I’m trying to always make points where I can, and getting into the real important stuff of the season.

“This is a big week, as are some of the other Rolex Series vvents leading up to DP World Championship in Dubai.

“So I’m here, obviously to enjoy myself and enjoy this great place. But I want to win – and I’d love to be on another Ryder Cup Team, especially at my age.

“The level of golf being played by guys like Rory and Brooks is so phenomenal that I’m just trying to sort of hang on to coat-tails.

“I can’t play that level of golf, not at my age, but I’m trying to push myself and be as good as I can be as long as I can be.”

SO what does Casey think of the changes made to the Wentworth course which holds special memories of childhood around the famous West Course?

“It’s still a ball-striker’s golf course,” said Casey when he faced the media after Tuesday’s practice round.

“It’s a Harry Colt masterpiece. It’s been, you know, fettled, obviously, through the years, but I believe it’s back to, you know, a really good design.

“On a beautiful day, right here, standing right now, these winds swirl, and so it’s a combination of great ball-striking, great driving, and then a lot of patience and knowing the nuances of this place,” said Casey, who once revealed on TV that one of the club pro’s had given him tips on how to read the swirling breezes on the Surrey-Berkshire border.

“Yeah, it was always one of my favorites. I’m a Harry Colt fan. I’m still a member at Burhill just around the corner from here and used to play a bunch of Harry Colt courses in the area.

“It then went through a little bit of change, some of it I wasn’t necessarily a fan of.

“But it needed – you know, it did need a little TLC,” he said after some players questioned the changes to the 18th in particular where a big stream was carved around the front of the green, after attempts to add more bunkering around the approach failed to win widespread approval.

Casey revealed: “I think the changes that have been made, nobody ever gets them right, first time out.

“Things have sort of organically softened and changed, and it’s fair to say that with the knowledge now of the changes and how to set up the golf course for a great championship, I’m a fan of it.

“You’re never going to take away the history of it, either.

“Walking these fairways as pretty much every great has done through their career, everybody’s been around this place or won around here.